Cross-section of the Sun

Stellar structure models describe the internal structure of a star in detail and make predictions about the luminosity, the color and the future evolution of the star. Different classes and ages of stars have different internal structures, reflecting their elemental makeup and energy transport mechanisms. The different transport mechanisms of low-mass, intermediate-mass, and high-mass stars

Different layers of the stars transport heat up and outwards in different ways, primarily convection and radiative transfer, but thermal conduction is important in white dwarfs.

Convection is the dominant mode of energy transport when the temperature gradient is steep enough so that a given parcel of gas within the star will continue to rise if it rises slightly via an adiabatic process. In this case, the rising parcel is buoyant and continues to rise if it is warmer than the surrounding gas; if the rising parcel is cooler than the surrounding gas, it will fall back to its original height.[1] In regions with a low temperature gradient and a low enough opacity to allow energy transport via radiation, radiation is the dominant mode of energy transport.

The internal structure of a main sequence star depends upon the mass of the star.

The lowest mass main sequence stars have no radiation zone; the dominant energy transport mechanism throughout the star is convection.[3] 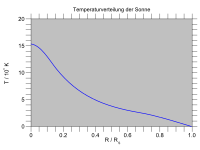 Temperature profile in the Sun 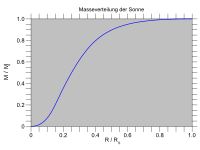 Mass inside a given radius in the Sun 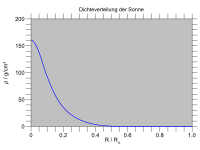 Density profile in the Sun 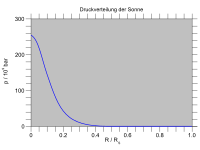 Pressure profile in the Sun

where [math]\displaystyle{ \epsilon_\nu }[/math] is the luminosity produced in the form of neutrinos (which usually escape the star without interacting with ordinary matter) per unit mass. Outside the core of the star, where nuclear reactions occur, no energy is generated, so the luminosity is constant.

where k is the thermal conductivity.

The case of convective energy transport does not have a known rigorous mathematical formulation, and involves turbulence in the gas. Convective energy transport is usually modeled using mixing length theory. This treats the gas in the star as containing discrete elements which roughly retain the temperature, density, and pressure of their surroundings but move through the star as far as a characteristic length, called the mixing length.[5] For a monatomic ideal gas, when the convection is adiabatic, meaning that the convective gas bubbles don't exchange heat with their surroundings, mixing length theory yields

where [math]\displaystyle{ \gamma = c_p / c_v }[/math] is the adiabatic index, the ratio of specific heats in the gas. (For a fully ionized ideal gas, [math]\displaystyle{ \gamma = 5/3 }[/math].) When the convection is not adiabatic, the true temperature gradient is not given by this equation. For example, in the Sun the convection at the base of the convection zone, near the core, is adiabatic but that near the surface is not. The mixing length theory contains two free parameters which must be set to make the model fit observations, so it is a phenomenological theory rather than a rigorous mathematical formulation.[6]

Also required are the equations of state, relating the pressure, opacity and energy generation rate to other local variables appropriate for the material, such as temperature, density, chemical composition, etc. Relevant equations of state for pressure may have to include the perfect gas law, radiation pressure, pressure due to degenerate electrons, etc. Opacity cannot be expressed exactly by a single formula. It is calculated for various compositions at specific densities and temperatures and presented in tabular form.[7] Stellar structure codes (meaning computer programs calculating the model's variables) either interpolate in a density-temperature grid to obtain the opacity needed, or use a fitting function based on the tabulated values. A similar situation occurs for accurate calculations of the pressure equation of state. Finally, the nuclear energy generation rate is computed from nuclear physics experiments, using reaction networks to compute reaction rates for each individual reaction step and equilibrium abundances for each isotope in the gas.[6][8]

Although nowadays stellar evolution models describe the main features of color–magnitude diagrams, important improvements have to be made in order to remove uncertainties which are linked to the limited knowledge of transport phenomena. The most difficult challenge remains the numerical treatment of turbulence. Some research teams are developing simplified modelling of turbulence in 3D calculations.

The above simplified model is not adequate without modification in situations when the composition changes are sufficiently rapid. The equation of hydrostatic equilibrium may need to be modified by adding a radial acceleration term if the radius of the star is changing very quickly, for example if the star is radially pulsating.[9] Also, if the nuclear burning is not stable, or the star's core is rapidly collapsing, an entropy term must be added to the energy equation.[10]