Sulfonic acids are produced by the process of sulfonation. Usually the sulfonating agent is sulfur trioxide. A large scale application of this method is the production of alkylbenzenesulfonic acids:

Many alkane sulfonic acids are obtained from bisulfite, which adds to terminal alkenes or is alkylated by alkyl halides:[3]

Sulfonic acids can be prepared by oxidation of thiols:

Such a pathway is the basis of the biosynthesis of taurine.

Vinylsulfonic acid is derived by hydrolysis of carbyl sulfate, (C2H4(SO3)2), which in turn is obtain by the addition of sulfur trioxide to ethylene.

Sulfonic acids are strong acids. They are commonly cited as being around a million times stronger than the corresponding carboxylic acid. For example, p-Toluenesulfonic acid and methanesulfonic acid have pKa values of −2.8 and −1.9, respectively, while those of benzoic acid and acetic acid are 4.20 and 4.76, respectively. However, as a consequence of their strong acidity, their pKa values cannot be measured directly, and values commonly quoted should be regarded as indirect estimates with significant uncertainties. For instance, various sources have reported the pKa of methanesulfonic acid to be as high as −0.6[4] or as low as −6.5.[5] Sulfonic acids are known to react with solid sodium chloride (salt) to form the sodium sulfonate and hydrogen chloride.[6] This property implies an acidity within two or three orders of magnitude of that of HCl(g), whose pKa was recently accurately determined (pKaaq = −5.9).

Because of their polarity, sulfonic acids tend to be crystalline solids or viscous, high-boiling liquids. They are also usually colourless and nonoxidizing,[7] which makes them suitable for use as acid catalysts in organic reactions. Their polarity, in conjunction with their high acidity, renders short-chain sulfonic acids water-soluble, while longer-chain ones exhibit detergent-like properties.

The structure of sulfonic acids is illustrated by the prototype, methanesulfonic acid. The sulfonic acid group, RSO2OH features a tetrahedral sulfur centre, meaning that sulfur is at the center of four atoms: three oxygens and one carbon. The overall geometry of the sulfur centre is reminiscent of the shape of sulfuric acid.

Although both alkyl and aryl sulfonic acids are known, most of the applications are associated with the aromatic derivatives.

Detergents and surfactants are molecules that combine highly nonpolar and highly polar groups. Traditionally, soaps are the popular surfactants, being derived from fatty acids. Since the mid-20th century, the usage of sulfonic acids has surpassed soap in advanced societies. For example, an estimated 2 billion kilograms of alkylbenzenesulfonates are produced annually for diverse purposes. Lignin sulfonates, produced by sulfonation of lignin are components of drilling fluids and additives in certain kinds of concrete.[8]

Many if not most of the anthraquinone dyes are produced or processed via sulfonation.[9] Sulfonic acids tend to bind tightly to proteins and carbohydrates. Most "washable" dyes are sulfonic acids (or have the functional sulfonyl group in them) for this reason. p-Cresidinesulfonic acid is used to make food dyes.

Sulfa drugs, a class of antibacterials, are produced from sulfonic acids. 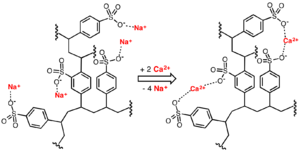 Sulfonates are the basis of most ion exchange resins used in water softening.

In the sulfite process for paper-making, lignin is removed from the lignocellulose by treating wood chips with solutions of sulfite and bisulfite ions. These reagents cleave the bonds between the cellulose and lignin components and especially within the lignin itself. The lignin is converted to lignosulfonates, useful ionomers, which are soluble and can be separated from the cellulose fibers.

idealized scheme for lignin depolymerization by the Sulfite process.

Sulfonic acids can be converted to esters. This class of organic compounds has the general formula R−SO2−OR. Sulfonic esters such as methyl triflate are considered good alkylating agents in organic synthesis. Such sulfonate esters are often prepared by alcoholysis of the sulfonyl chlorides:

Sulfonyl halide groups occur when a sulfonyl functional group is singly bonded to a halogen atom. They have the general formula R−SO2−X where X is a halide, almost invariably chloride. They are produced by chlorination of sulfonic acids using thionyl chloride and related reagents.

Although strong, the (aryl)C−SO3− bond can be broken by nucleophilic reagents. Of historic and continuing significance is the α-sulfonation of anthroquinone followed by displacement of the sulfonate group by other nucleophiles, which cannot be installed directly.[9] An early method for producing phenol involved the base hydrolysis of sodium benzenesulfonate, which can be generated readily from benzene.[12]

The conditions for this reaction are harsh, however, requiring 'fused alkali' or molten sodium hydroxide at 350 °C for benzenesulfonic acid itself.[13] Unlike the mechanism for the fused alkali hydrolysis of chlorobenzene, which proceeds through elimination-addition (benzyne mechanism), benzenesulfonic acid undergoes the analogous conversion by an SNAr mechanism, as revealed by a 14C labeling, despite the lack of stabilizing substituents.[14] Sulfonic acids with electron-withdrawing groups (e.g., with NO2 or CN substituents) undergo this transformation much more readily.