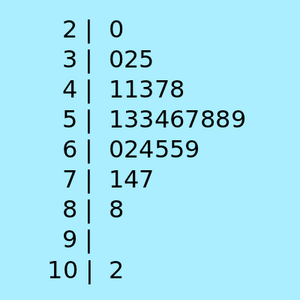 A stem-and-leaf display or stem-and-leaf plot is a device for presenting quantitative data in a graphical format, similar to a histogram, to assist in visualizing the shape of a distribution. They evolved from Arthur Bowley's work in the early 1900s, and are useful tools in exploratory data analysis. Stemplots became more commonly used in the 1980s after the publication of John Tukey's book on exploratory data analysis in 1977.[1] The popularity during those years is attributable to their use of monospaced (typewriter) typestyles that allowed computer technology of the time to easily produce the graphics. Modern computers' superior graphic capabilities have meant these techniques are less often used.

This plot has been implemented in Octave[2] and R.[3]

A stem-and-leaf plot is also called a stemplot, but the latter term often refers to another chart type. A simple stem plot may refer to plotting a matrix of y values onto a common x axis, and identifying the common x value with a vertical line, and the individual y values with symbols on the line.[4]

Unlike histograms, stem-and-leaf displays retain the original data to at least two significant digits, and put the data in order, thereby easing the move to order-based inference and non-parametric statistics.

Next, it must be determined what the stems will represent and what the leaves will represent. Typically, the leaf contains the last digit of the number and the stem contains all of the other digits. In the case of very large numbers, the data values may be rounded to a particular place value (such as the hundreds place) that will be used for the leaves. The remaining digits to the left of the rounded place value are used as the stem.

In this example, the leaf represents the ones place and the stem will represent the rest of the number (tens place and higher).

The stem-and-leaf display is drawn with two columns separated by a vertical line. The stems are listed to the left of the vertical line. It is important that each stem is listed only once and that no numbers are skipped, even if it means that some stems have no leaves. The leaves are listed in increasing order in a row to the right of each stem.

Rounding may be needed to create a stem-and-leaf display. Based on the following set of data, the stem plot below would be created:

For negative numbers, a negative is placed in front of the stem unit, which is still the value X / 10. Non-integers are rounded. This allowed the stem and leaf plot to retain its shape, even for more complicated data sets. As in this example below:

Stem-and-leaf displays can also be used to convey non-numerical information. In this example of valid two-letter words in Collins Scrabble Words (the word list used in Scrabble tournaments outside the US) with their initials as stems, it can be easily seen that the top three initials are o, a and e.[5]