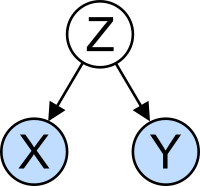 Illustration of a simple confounding factor. In other words, Z is the cause of X and Y. 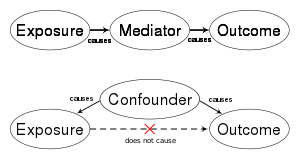 Whereas a mediator is a factor in the causal chain (1), a confounder is a spurious factor incorrectly implying causation (2)

Confounding is defined in terms of the data generating model (as in the figure above). Let X be some independent variable, and Y some dependent variable. To estimate the effect of X on Y, the statistician must suppress the effects of extraneous variables that influence both X and Y. We say that X and Y are confounded by some other variable Z whenever Z causally influences both X and Y.

Let [math]\displaystyle{ P(y \mid \text{do}(x)) }[/math] be the probability of event Y = y under the hypothetical intervention X = x. X and Y are not confounded if and only if the following holds:

for all values X = x and Y = y, where [math]\displaystyle{ P(y \mid x) }[/math] is the conditional probability upon seeing X = x. Intuitively, this equality states that X and Y are not confounded whenever the observationally witnessed association between them is the same as the association that would be measured in a controlled experiment, with x randomized.

Consider a researcher attempting to assess the effectiveness of drug X, from population data in which drug usage was a patient's choice. The data shows that gender (Z) influences a patient's choice of drug as well as their chances of recovery (Y). In this scenario, gender Z confounds the relation between X and Y since Z is a cause of both X and Y:

because the observational quantity contains information about the correlation between X and Z, and the interventional quantity does not (since X is not correlated with Z in a randomized experiment). The statistician desires the unbiased estimate [math]\displaystyle{ P(y \mid \text{do}(x)) }[/math], but in cases where only observational data are available, an unbiased estimate can only be obtained by "adjusting" for all confounding factors, namely, conditioning on their various values and averaging the result. In the case of a single confounder Z, this leads to the "adjustment formula":

which gives an unbiased estimate for the causal effect of X on Y. The same adjustment formula works when there are multiple confounders except, in this case, the choice of a set Z of variables that would guarantee unbiased estimates must be done with caution. The criterion for a proper choice of variables is called the Back-Door [4][5] and requires that the chosen set Z "blocks" (or intercepts)[clarification needed] every path[clarification needed] from X to Y that ends with an arrow into X. Such sets are called "Back-Door admissible" and may include variables which are not common causes of X and Y, but merely proxies thereof.

Returning to the drug use example, since Z complies with the Back-Door requirement (i.e., it intercepts the one Back-Door path [math]\displaystyle{ X \leftarrow Z \rightarrow Y }[/math]), the Back-Door adjustment formula is valid:

In this way the physician can predict the likely effect of administering the drug from observational studies in which the conditional probabilities appearing on the right-hand side of the equation can be estimated by regression.

Contrary to common beliefs, adding covariates to the adjustment set Z can introduce bias. A typical counterexample occurs when Z is a common effect of X and Y,[6] a case in which Z is not a confounder (i.e., the null set is Back-door admissible) and adjusting for Z would create bias known as "collider bias" or "Berkson's paradox."

In general, confounding can be controlled by adjustment if and only if there is a set of observed covariates that satisfies the Back-Door condition. Moreover, if Z is such a set, then the adjustment formula of Eq. (3) is valid <4,5>. Pearl's do-calculus provide additional conditions under which P(y | do(x)) can be estimated, not necessarily by adjustment.[7]

According to Morabia (2011),[8] the word derives from the Medieval Latin verb "confudere", which meant "mixing", and was probably chosen to represent the confusion (from Latin: con=with + fusus=mix or fuse together) between the cause one wishes to assess and other causes that may affect the outcome and thus confuse, or stand in the way of the desired assessment. Fisher used the word "confounding" in his 1935 book "The Design of Experiments"[9] to denote any source of error in his ideal of randomized experiment. According to Vandenbroucke (2004)[10] it was Kish[11] who used the word "confounding" in the modern sense of the word, to mean "incomparability" of two or more groups (e.g., exposed and unexposed) in an observational study.

Formal conditions defining what makes certain groups "comparable" and others "incomparable" were later developed in epidemiology by Greenland and Robins (1986)[12] using the counterfactual language of Neyman (1935)[13] and Rubin (1974).[14] These were later supplemented by graphical criteria such as the Back-Door condition (Pearl 1993; Greenland, Pearl and Robins, 1999).[3][4]

Graphical criteria were shown to be formally equivalent to the counterfactual definition,[15] but more transparent to researchers relying on process models.

In the case of risk assessments evaluating the magnitude and nature of risk to human health, it is important to control for confounding to isolate the effect of a particular hazard such as a food additive, pesticide, or new drug. For prospective studies, it is difficult to recruit and screen for volunteers with the same background (age, diet, education, geography, etc.), and in historical studies, there can be similar variability. Due to the inability to control for variability of volunteers and human studies, confounding is a particular challenge. For these reasons, experiments offer a way to avoid most forms of confounding.

Confounding variables may also be categorised according to their source. The choice of measurement instrument (operational confound), situational characteristics (procedural confound), or inter-individual differences (person confound).

Say one is studying the relation between birth order (1st child, 2nd child, etc.) and the presence of Down Syndrome in the child. In this scenario, maternal age would be a confounding variable:

In risk assessments, factors such as age, gender, and educational levels often affect health status and so should be controlled. Beyond these factors, researchers may not consider or have access to data on other causal factors. An example is on the study of smoking tobacco on human health. Smoking, drinking alcohol, and diet are lifestyle activities that are related. A risk assessment that looks at the effects of smoking but does not control for alcohol consumption or diet may overestimate the risk of smoking.[19] Smoking and confounding are reviewed in occupational risk assessments such as the safety of coal mining.[20] When there is not a large sample population of non-smokers or non-drinkers in a particular occupation, the risk assessment may be biased towards finding a negative effect on health.

Decreasing the potential for confounding

A reduction in the potential for the occurrence and effect of confounding factors can be obtained by increasing the types and numbers of comparisons performed in an analysis. If measures or manipulations of core constructs are confounded (i.e. operational or procedural confounds exist), subgroup analysis may not reveal problems in the analysis. Additionally, increasing the number of comparisons can create other problems (see multiple comparisons).

Peer review is a process that can assist in reducing instances of confounding, either before study implementation or after analysis has occurred. Peer review relies on collective expertise within a discipline to identify potential weaknesses in study design and analysis, including ways in which results may depend on confounding. Similarly, replication can test for the robustness of findings from one study under alternative study conditions or alternative analyses (e.g., controlling for potential confounds not identified in the initial study).

Confounding effects may be less likely to occur and act similarly at multiple times and locations. In selecting study sites, the environment can be characterized in detail at the study sites to ensure sites are ecologically similar and therefore less likely to have confounding variables. Lastly, the relationship between the environmental variables that possibly confound the analysis and the measured parameters can be studied. The information pertaining to environmental variables can then be used in site-specific models to identify residual variance that may be due to real effects.[21]

Depending on the type of study design in place, there are various ways to modify that design to actively exclude or control confounding variables:[22]

All these methods have their drawbacks:

These sites contain descriptions or examples of confounding variables: