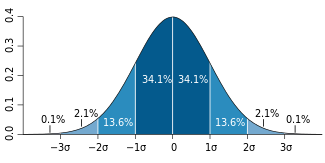 For a value that is sampled with an unbiased normally distributed error, the above depicts the proportion of samples that would fall between 0, 1, 2, and 3 standard deviations above and below the actual value.

In regression analysis, the term "standard error" refers either to the square root of the reduced chi-squared statistic, or the standard error for a particular regression coefficient (as used in, say, confidence intervals).

Standard error of the mean

As this is only an estimator for the true "standard error", it is common to see other notations here such as:

Accuracy of the estimator

which due to the Bienaymé formula, will have variance

The variance of the mean is then

The standard error is, by definition, the standard deviation of [math]\displaystyle{ \bar{x} }[/math] which is simply the square root of the variance:

For correlated random variables the sample variance needs to be computed according to the Markov chain central limit theorem.

(since the standard deviation is the square root of the variance)

Note: The Student's probability distribution is approximated well by the Gaussian distribution when the sample size is over 100. For such samples one can use the latter distribution, which is much simpler.

An example of how [math]\displaystyle{ \operatorname{SE} }[/math] is used is to make confidence intervals of the unknown population mean. If the sampling distribution is normally distributed, the sample mean, the standard error, and the quantiles of the normal distribution can be used to calculate confidence intervals for the true population mean. The following expressions can be used to calculate the upper and lower 95% confidence limits, where [math]\displaystyle{ \bar{x} }[/math] is equal to the sample mean, [math]\displaystyle{ \operatorname{SE} }[/math] is equal to the standard error for the sample mean, and 1.96 is the approximate value of the 97.5 percentile point of the normal distribution:

Standard errors provide simple measures of uncertainty in a value and are often used because:

which, for large N:

to account for the added precision gained by sampling close to a larger percentage of the population. The effect of the FPC is that the error becomes zero when the sample size n is equal to the population size N.

Correction for correlation in the sample 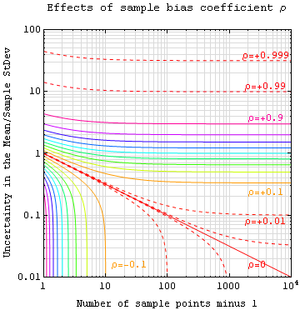 Expected error in the mean of A for a sample of n data points with sample bias coefficient ρ. The unbiased standard error plots as the ρ = 0 diagonal line with log-log slope −½.

where the sample bias coefficient ρ is the widely used Prais–Winsten estimate of the autocorrelation-coefficient (a quantity between −1 and +1) for all sample point pairs. This approximate formula is for moderate to large sample sizes; the reference gives the exact formulas for any sample size, and can be applied to heavily autocorrelated time series like Wall Street stock quotes. Moreover, this formula works for positive and negative ρ alike.[11] See also unbiased estimation of standard deviation for more discussion.