Short description: Plot of the empirical distribution of p-values against the theoretical one 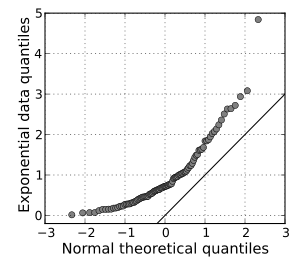 A normal Q–Q plot of randomly generated, independent standard exponential data, (X ~ Exp(1)). This Q–Q plot compares a sample of data on the vertical axis to a statistical population on the horizontal axis. The points follow a strongly nonlinear pattern, suggesting that the data are not distributed as a standard normal (X ~ N(0,1)). The offset between the line and the points suggests that the mean of the data is not 0. The median of the points can be determined to be near 0.7

300px|thumb|right|A normal Q–Q plot comparing randomly generated, independent standard normal data on the vertical axis to a standard normal population on the horizontal axis. The linearity of the points suggests that the data are normally distributed. 300px|thumb|A Q–Q plot of a sample of data versus a Weibull distribution. The deciles of the distributions are shown in red. Three outliers are evident at the high end of the range. Otherwise, the data fit the Weibull(1,2) model well. 300px|thumb|A Q–Q plot comparing the distributions of [[standard score|standardized daily maximum temperatures at 25 stations in the US state of Ohio in March and in July. The curved pattern suggests that the central quantiles are more closely spaced in July than in March, and that the July distribution is skewed to the left compared to the March distribution. The data cover the period 1893–2001.]]

The term "probability plot" sometimes refers specifically to a Q–Q plot, sometimes to a more general class of plots, and sometimes to the less commonly used P–P plot. The probability plot correlation coefficient plot (PPCC plot) is a quantity derived from the idea of Q–Q plots, which measures the agreement of a fitted distribution with observed data and which is sometimes used as a means of fitting a distribution to data.

Q–Q plot for first opening/final closing dates of Washington State Route 20, versus a normal distribution.[5] Outliers are visible in the upper right corner.

The main step in constructing a Q–Q plot is calculating or estimating the quantiles to be plotted. If one or both of the axes in a Q–Q plot is based on a theoretical distribution with a continuous cumulative distribution function (CDF), all quantiles are uniquely defined and can be obtained by inverting the CDF. If a theoretical probability distribution with a discontinuous CDF is one of the two distributions being compared, some of the quantiles may not be defined, so an interpolated quantile may be plotted. If the Q–Q plot is based on data, there are multiple quantile estimators in use. Rules for forming Q–Q plots when quantiles must be estimated or interpolated are called plotting positions.

A simple case is where one has two data sets of the same size. In that case, to make the Q–Q plot, one orders each set in increasing order, then pairs off and plots the corresponding values. A more complicated construction is the case where two data sets of different sizes are being compared. To construct the Q–Q plot in this case, it is necessary to use an interpolated quantile estimate so that quantiles corresponding to the same underlying probability can be constructed.

Many other choices have been suggested, both formal and heuristic, based on theory or simulations relevant in context. The following subsections discuss some of these. A narrower question is choosing a maximum (estimation of a population maximum), known as the German tank problem, for which similar "sample maximum, plus a gap" solutions exist, most simply m + m/n − 1. A more formal application of this uniformization of spacing occurs in maximum spacing estimation of parameters.

Expected value of the order statistic for a uniform distribution

Expected value of the order statistic for a standard normal distribution

In using a normal probability plot, the quantiles one uses are the rankits, the quantile of the expected value of the order statistic of a standard normal distribution.

More generally, Shapiro–Wilk test uses the expected values of the order statistics of the given distribution; the resulting plot and line yields the generalized least squares estimate for location and scale (from the intercept and slope of the fitted line).[9] Although this is not too important for the normal distribution (the location and scale are estimated by the mean and standard deviation, respectively), it can be useful for many other distributions.

However, this requires calculating the expected values of the order statistic, which may be difficult if the distribution is not normal.

Median of the order statistics

This can be easily generated for any distribution for which the quantile function can be computed, but conversely the resulting estimates of location and scale are no longer precisely the least squares estimates, though these only differ significantly for n small.

For large sample size, n, there is little difference between these various expressions.

The reason for this estimate is that the order statistic medians do not have a simple form.