Analysis of covariance (ANCOVA) is a general linear model which blends ANOVA and regression. ANCOVA evaluates whether the means of a dependent variable (DV) are equal across levels of a categorical independent variable (IV) often called a treatment, while statistically controlling for the effects of other continuous variables that are not of primary interest, known as covariates (CV) or nuisance variables. Mathematically, ANCOVA decomposes the variance in the DV into variance explained by the CV(s), variance explained by the categorical IV, and residual variance. Intuitively, ANCOVA can be thought of as 'adjusting' the DV by the group means of the CV(s).[1]

The ANCOVA model assumes a linear relationship between the response (DV) and covariate (CV):

Under this specification, the categorical treatment effects sum to zero [math]\displaystyle{ \left(\sum_i^a \tau_i = 0\right). }[/math] The standard assumptions of the linear regression model are also assumed to hold, as discussed below.[2]

If this value is larger than a critical value, we conclude that there is a significant difference between groups. Unexplained variance includes error variance (e.g., individual differences), as well as the influence of other factors. Therefore, the influence of CVs is grouped in the denominator. When we control for the effect of CVs on the DV, we remove it from the denominator making F larger, thereby increasing our power to find a significant effect if one exists at all.

Another use of ANCOVA is to adjust for preexisting differences in nonequivalent (intact) groups. This controversial application aims at correcting for initial group differences (prior to group assignment) that exists on DV among several intact groups. In this situation, participants cannot be made equal through random assignment, so CVs are used to adjust scores and make participants more similar than without the CV. However, even with the use of covariates, there are no statistical techniques that can equate unequal groups. Furthermore, the CV may be so intimately related to the IV that removing the variance on the DV associated with the CV would remove considerable variance on the DV, rendering the results meaningless.[4]

There are several key assumptions that underlie the use of ANCOVA and affect interpretation of the results.[2] The standard linear regression assumptions hold; further we assume that the slope of the covariate is equal across all treatment groups (homogeneity of regression slopes).

The regression relationship between the dependent variable and concomitant variables must be linear.

The error is a random variable with conditional zero mean and equal variances for different treatment classes and observations.

The errors are uncorrelated. That is, the error covariance matrix is diagonal. 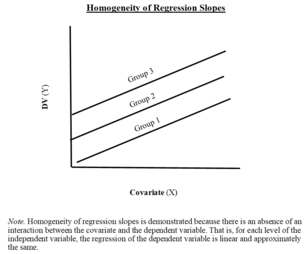 The fifth issue, concerning the homogeneity of different treatment regression slopes is particularly important in evaluating the appropriateness of ANCOVA model. Also note that we only need the error terms to be normally distributed. In fact both the independent variable and the concomitant variables will not be normally distributed in most cases.

If a CV is highly related to another CV (at a correlation of 0.5 or more), then it will not adjust the DV over and above the other CV. One or the other should be removed since they are statistically redundant.

Test the homogeneity of variance assumption

Tested by Levene's test of equality of error variances. This is most important after adjustments have been made, but if you have it before adjustment you are likely to have it afterwards.

To see if the CV significantly interacts with the IV, run an ANCOVA model including both the IV and the CVxIV interaction term. If the CVxIV interaction is significant, ANCOVA should not be performed. Instead, Green & Salkind[5] suggest assessing group differences on the DV at particular levels of the CV. Also consider using a moderated regression analysis, treating the CV and its interaction as another IV. Alternatively, one could use mediation analyses to determine if the CV accounts for the IV's effect on the DV.

Simple main effects plot showing a small Interaction between the two levels of the independent variable.