In statistics, an interaction may arise when considering the relationship among three or more variables, and describes a situation in which the effect of one causal variable on an outcome depends on the state of a second causal variable (that is, when effects of the two causes are not additive).[1][2] Although commonly thought of in terms of causal relationships, the concept of an interaction can also describe non-causal associations. Interactions are often considered in the context of regression analyses or factorial experiments.

The presence of interactions can have important implications for the interpretation of statistical models. If two variables of interest interact, the relationship between each of the interacting variables and a third "dependent variable" depends on the value of the other interacting variable. In practice, this makes it more difficult to predict the consequences of changing the value of a variable, particularly if the variables it interacts with are hard to measure or difficult to control.

The binary factor A and the quantitative variable X interact (are non-additive) when analyzed with respect to the outcome variable Y.

Thus, for a response Y and two variables x1 and x2 an additive model would be:

In contrast to this,

is an example of a model with an interaction between variables x1 and x2 ("error" refers to the random variable whose value is that by which Y differs from the expected value of Y; see errors and residuals in statistics). Often, models are presented without the interaction term [math]\displaystyle{ d(x_1\times x_2) }[/math], but this confounds the main effect and interaction effect (i.e., without specifying the interaction term, it is possible that any main effect found is actually due to an interaction).

A simple setting in which interactions can arise is a two-factor experiment analyzed using Analysis of Variance (ANOVA). Suppose we have two binary factors A and B. For example, these factors might indicate whether either of two treatments were administered to a patient, with the treatments applied either singly, or in combination. We can then consider the average treatment response (e.g. the symptom levels following treatment) for each patient, as a function of the treatment combination that was administered. The following table shows one possible situation:

In contrast, if the following average responses are observed

then there is an interaction between the treatments — their effects are not additive. Supposing that greater numbers correspond to a better response, in this situation treatment B is helpful on average if the subject is not also receiving treatment A, but is detrimental on average if given in combination with treatment A. Treatment A is helpful on average regardless of whether treatment B is also administered, but it is more helpful in both absolute and relative terms if given alone, rather than in combination with treatment B. Similar observations are made for this particular example in the next section.

The property of unit treatment additivity is not invariant under a change of scale, so statisticians often use transformations to achieve unit treatment additivity. If the response variable is expected to follow a parametric family of probability distributions, then the statistician may specify (in the protocol for the experiment or observational study) that the responses be transformed to stabilize the variance.[7] In many cases, a statistician may specify that logarithmic transforms be applied to the responses, which are believed to follow a multiplicative model.[5][8]

In recent years, it has become common to use the terminology of Donald Rubin, which uses counterfactuals. Suppose we are comparing two groups of people with respect to some attribute y. For example, the first group might consist of people who are given a standard treatment for a medical condition, with the second group consisting of people who receive a new treatment with unknown effect. Taking a "counterfactual" perspective, we can consider an individual whose attribute has value y if that individual belongs to the first group, and whose attribute has value τ(y) if the individual belongs to the second group. The assumption of "unit treatment additivity" is that τ(y) = τ, that is, the "treatment effect" does not depend on y. Since we cannot observe both y and τ(y) for a given individual, this is not testable at the individual level. However, unit treatment additivity implies that the cumulative distribution functions F1 and F2 for the two groups satisfy F2(y)  = F1(y − τ), as long as the assignment of individuals to groups 1 and 2 is independent of all other factors influencing y (i.e. there are no confounders). Lack of unit treatment additivity can be viewed as a form of interaction between the treatment assignment (e.g. to groups 1 or 2), and the baseline, or untreated value of y.

Sometimes the interacting variables are categorical variables rather than real numbers and the study might then be dealt with as an analysis of variance problem. For example, members of a population may be classified by religion and by occupation. If one wishes to predict a person's height based only on the person's religion and occupation, a simple additive model, i.e., a model without interaction, would add to an overall average height an adjustment for a particular religion and another for a particular occupation. A model with interaction, unlike an additive model, could add a further adjustment for the "interaction" between that religion and that occupation. This example may cause one to suspect that the word interaction is something of a misnomer.

Statistically, the presence of an interaction between categorical variables is generally tested using a form of analysis of variance (ANOVA). If one or more of the variables is continuous in nature, however, it would typically be tested using moderated multiple regression.[9] This is so-called because a moderator is a variable that affects the strength of a relationship between two other variables.

Genichi Taguchi contended[10] that interactions could be eliminated from a system by appropriate choice of response variable and transformation. However George Box and others have argued that this is not the case in general.[11]

The most general approach to modeling interaction effects involves regression, starting from the elementary version given above:

where the interaction term [math]\displaystyle{ (x_1\times x_2) }[/math] could be formed explicitly by multiplying two (or more) variables, or implicitly using factorial notation in modern statistical packages such as Stata. The components x1 and x2 might be measurements or {0,1} dummy variables in any combination. Interactions involving a dummy variable multiplied by a measurement variable are termed slope dummy variables,[12] because they estimate and test the difference in slopes between groups 0 and 1.

When measurement variables are employed in interactions, it is often desirable to work with centered versions, where the variable's mean (or some other reasonably central value) is set as zero. Centering can make the main effects in interaction models more interpretable, as it reduces the multicollinearity between the interaction term and the main effects.[13] The coefficient a in the equation above, for example, represents the effect of x1 when x2 equals zero.

Regression approaches to interaction modeling are very general because they can accommodate additional predictors, and many alternative specifications or estimation strategies beyond ordinary least squares. Robust, quantile, and mixed-effects (multilevel) models are among the possibilities, as is generalized linear modeling encompassing a wide range of categorical, ordered, counted or otherwise limited dependent variables. The graph depicts an education*politics interaction, from a probability-weighted logit regression analysis of survey data.[14]

Example: Interaction of species and air temperature and their effect on body temperature

Consider a study of the body temperature of different species at different air temperatures, in degrees Fahrenheit. The data are shown in the table below. 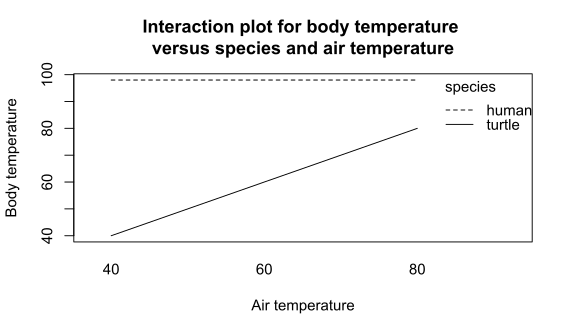 Example: effect of stroke severity and treatment on recovery

As a second example, consider a clinical trial on the interaction between stroke severity and the efficacy of a drug on patient survival. The data are shown in the table below. 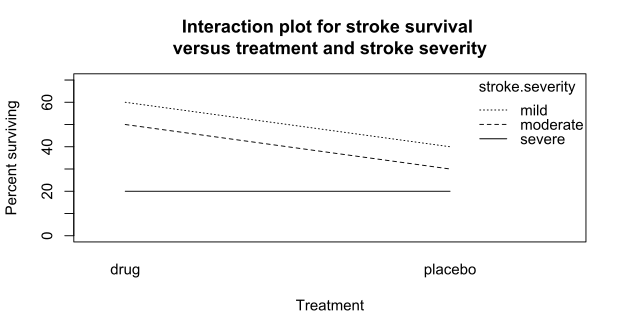 Analysis of variance and regression analysis are used to test for significant interactions.

Example: Interaction of temperature and time in cookie baking

Is the yield of good cookies affected by the baking temperature and time in the oven? The table shows data for 8 batches of cookies. 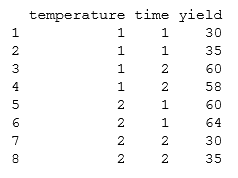 In the ANOVA model that ignores interaction, neither temperature nor time has a significant effect on yield (p=0.91), which is clearly the incorrect conclusion. The more appropriate ANOVA model should test for possible interaction.

Real-world examples of interaction include: