Simulated experiments from three different UDDs. 0 and 1 responses are marked by o and x, respectively. Top to bottom: the original "simple" UDD that targets the median, a Durham-Flournoy biased-coin UDD targeting approximately the 20.6% percentile, and a k-in-a-row / "transformed" UDD targeting the same percentile.

Dose-finding designs are sequential and response-adaptive: the dose at a given point in the experiment depends upon previous outcomes, rather than be fixed a priori. Dose-finding designs are generally more efficient for this task than fixed designs, but their properties are harder to analyze, and some require specialized design software. UDDs use a discrete set of doses rather than vary the dose continuously. They are relatively simple to implement, and are also among the best understood dose-finding designs. Despite this simplicity, UDDs generate random walks with intricate properties.[1] The original UDD aimed to find the median threshold by increasing the dose one level after a "0" response, and decreasing it one level after a "1" response. Hence the name "up-and-down". Other UDDs break this symmetry in order to estimate percentiles other than the median, or are able to treat groups of subjects rather than one at a time.

UDDs were developed in the 1940s by several research groups independently.[2][3][4] The 1950s and 1960s saw rapid diversification with UDDs targeting percentiles other than the median, and expanding into numerous applied fields. The 1970s to early 1990s saw little UDD methods research, even as the design continued to be used extensively. A revival of UDD research since the 1990s has provided deeper understanding of UDDs and their properties,[5] and new and better estimation methods.[6][7]

UDDs are still used extensively in the two applications for which they were originally developed: psychophysics where they are used to estimate sensory thresholds and are often known as fixed forced-choice staircase procedures,[8] and explosive sensitivity testing, where the median-targeting UDD is often known as the Bruceton test. UDDs are also very popular in toxicity and anesthesiology research.[9] They are also considered a viable choice for Phase I clinical trials.[10]

Usually, UDD dose-transition rules bring the dose down (or at least bar it from escalating) after positive responses, and vice versa. Therefore, UDD random walks have a central tendency: dose assignments tend to meander back and forth around some dose [math]\displaystyle{ x^* }[/math] that can be calculated from the transition rules, when those are expressed as a function of [math]\displaystyle{ F(x) }[/math].[1] This dose has often been confused with the experiment's formal target [math]\displaystyle{ F^{-1}(\Gamma) }[/math], and the two are often identical - but they do not have to be. The target is the dose that the experiment is tasked with estimating, while [math]\displaystyle{ x^* }[/math], known as the "balance point", is approximately where the UDD's random walk revolves around.[11] 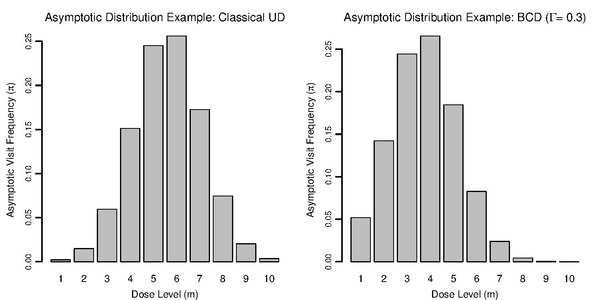 The "classical" UDD can be seen as a special case of each of the more versatile designs described below.

Nominally, group UDDs generate [math]\displaystyle{ s }[/math]-order random walks, since the [math]\displaystyle{ s }[/math] most recent observations are needed to determine the next allocation. However, with cohorts viewed as single mathematical entities, these designs generate a first-order random walk having a tri-diagonal TPM as above. Some relevant group UDD subfamilies:

Any numerical root-finding algorithm, e.g., Newton–Raphson, can be used to solve for [math]\displaystyle{ F^* }[/math].[13]

This is the most commonly used non-median UDD. It was introduced by Wetherill in 1963,[14] and proliferated by him and colleagues shortly thereafter to psychophysics,[15] where it remains one of the standard methods to find sensory thresholds.[8] Wetherill called it "transformed" UDD; Gezmu who was the first to analyze its random-walk properties, called it "Geometric" UDD in the 1990s;[16] and in the 2000s the more straightforward name "[math]\displaystyle{ k }[/math]-in-a-row" UDD was adopted.[11] The design's rules are deceptively simple:

Every dose escalation requires [math]\displaystyle{ k }[/math] non-toxicities observed on consecutive data points, all at the current dose, while de-escalation only requires a single toxicity. It closely resembles GUD[math]\displaystyle{ _{(s,0,1)} }[/math] described above, and indeed shares the same balance point. The difference is that [math]\displaystyle{ k }[/math]-in-a-row can bail out of a dose level upon the first toxicity, whereas its group UDD sibling might treat the entire cohort at once, and therefore might see more than one toxicity before descending. 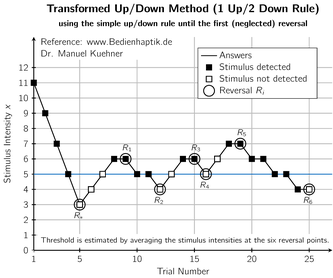 Example for reversal-averaging estimation of a psychophysics experiment. Reversal points are circled, and the first reversal was excluded from the average. The design is a two-stage, with the second (and main) stage [math]\displaystyle{ k }[/math]-in-a-row targeting the 70.7% percentile. The first stage (until the first reversal) uses the "classical" UDD, a commonly-employed scheme to speed up the arrival to the region of interest.

Unlike other design approaches, UDDs do not have a specific estimation method "bundled in" with the design as a default choice. Historically, the more common choice has been some weighted average of the doses administered, usually excluding the first few doses to mitigate the starting-point bias. This approach antedates deeper understanding of UDDs' Markov properties, but its success in numerical evaluations relies upon the eventual sampling from [math]\displaystyle{ \pi }[/math], since the latter is centered roughly around [math]\displaystyle{ x^*. }[/math][5]

The single most popular among these averaging estimators was introduced by Wetherill et al. in 1966, and only includes reversal points (points where the outcome switches from 0 to 1 or vice versa) in the average.[18]In recent years, the limitations of averaging estimators have come to light, in particular the many sources of bias that are very difficult to mitigate. Reversal estimators suffer from both multiple biases (although there is some inadvertent cancelling out of biases), and increased variance due to using a subsample of doses. However, the knowledge about averaging-estimator limitations has yet to disseminate outside the methodological literature and affect actual practice.[5]