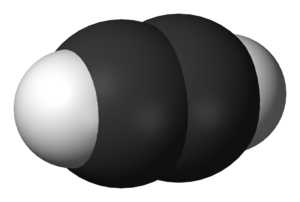 A 3D model of ethyne (acetylene), the simplest alkyne

In organic chemistry, an alkyne is an unsaturated hydrocarbon containing at least one carbon—carbon triple bond.[1] The simplest acyclic alkynes with only one triple bond and no other functional groups form a homologous series with the general chemical formula C
nH
2n-2. Alkynes are traditionally known as acetylenes, although the name acetylene also refers specifically to C
2H
2, known formally as ethyne using IUPAC nomenclature. Like other hydrocarbons, alkynes are generally hydrophobic.[2]

In acetylene, the H–C≡C bond angles are 180°. By virtue of this bond angle, alkynes are rod-like. Correspondingly, cyclic alkynes are rare. Benzyne cannot be isolated. The C≡C bond distance of 121 picometers is much shorter than the C=C distance in alkenes (134 pm) or the C–C bond in alkanes (153 pm).

The triple bond is very strong with a bond strength of 839 kJ/mol. The sigma bond contributes 369 kJ/mol, the first pi bond contributes 268 kJ/mol and the second pi-bond of 202 kJ/mol bond strength. Bonding usually discussed in the context of molecular orbital theory, which recognizes the triple bond as arising from overlap of s and p orbitals. In the language of valence bond theory, the carbon atoms in an alkyne bond are sp hybridized: they each have two unhybridized p orbitals and two sp hybrid orbitals. Overlap of an sp orbital from each atom forms one sp–sp sigma bond. Each p orbital on one atom overlaps one on the other atom, forming two pi bonds, giving a total of three bonds. The remaining sp orbital on each atom can form a sigma bond to another atom, for example to hydrogen atoms in the parent acetylene. The two sp orbitals project on opposite sides of the carbon atom.

In systematic chemical nomenclature, alkynes are named with the Greek prefix system without any additional letters. Examples include ethyne or octyne. In parent chains with four or more carbons, it is necessary to say where the triple bond is located. For octyne, one can either write 3-octyne or oct-3-yne when the bond starts at the third carbon. The lowest number possible is given to the triple bond. When no superior functional groups are present, the parent chain must include the triple bond even if it is not the longest possible carbon chain in the molecule. Ethyne is commonly called by its trivial name acetylene.

In chemistry, the suffix -yne is used to denote the presence of a triple bond. In organic chemistry, the suffix often follows IUPAC nomenclature. However, inorganic compounds featuring unsaturation in the form of triple bonds may be denoted by substitutive nomenclature with the same methods used with alkynes (i.e. the name of the corresponding saturated compound is modified by replacing the "-ane" ending with "-yne"). "-diyne" is used when there are two triple bonds, and so on. The position of unsaturation is indicated by a numerical locant immediately preceding the "-yne" suffix, or 'locants' in the case of multiple triple bonds. Locants are chosen so that the numbers are low as possible. "-yne" is also used as an infix to name substituent groups that are triply bound to the parent compound.

Sometimes a number between hyphens is inserted before it to state which atoms the triple bond is between. This suffix arose as a collapsed form of the end of the word "acetylene". The final "-e" disappears if it is followed by another suffix that starts with a vowel.[4]

Commercially, the dominant alkyne is acetylene itself, which is used as a fuel and a precursor to other compounds, e.g., acrylates. Hundreds of millions of kilograms are produced annually by partial oxidation of natural gas:[5]

Alkynes are prepared from 1,2- and 1,1-alkyl dihalides by double dehydrohalogenation. The reaction provides a means to generate alkynes from alkenes, which are first halogenated and then dehydrohalogenated. For example, phenylacetylene can be generated from styrene by bromination followed by treatment of the resulting of styrene dibromide with sodium amide in ammonia:[6][7]

Featuring a reactive functional group, alkynes participate in many organic reactions. Such use was pioneered by Ralph Raphael, who in 1955 wrote the first book describing their versatility as intermediates in synthesis.[8]

Being more unsaturated than alkenes, alkynes characteristically undergo reactions that show that they are "doubly unsaturated". Alkynes are capable of adding two equivalents of H
2, whereas an alkene adds only one equivalent.[9] Depending on catalysts and conditions, alkynes add one or two equivalents of hydrogen. Partial hydrogenation, stopping after the addition of only one equivalent to give the alkene, is usually more desirable since alkanes are less useful:

The largest scale application of this technology is the conversion of acetylene to ethylene in refineries (the steam cracking of alkanes yields a few percent acetylene, which is selectively hydrogenated in the presence of a palladium/silver catalyst). For more complex alkynes, the Lindlar catalyst is widely recommended to avoid formation of the alkane, for example in the conversion of phenylacetylene to styrene.[10] Similarly, halogenation of alkynes gives the alkene dihalides or alkyl tetrahalides:

The addition of one equivalent of H
2 to internal alkynes gives cis-alkenes.

Addition of halogens and related reagents

Alkynes characteristically are capable of adding two equivalents of halogens and hydrogen halides.

The addition of nonpolar E–H bonds across C≡C is general for silanes, boranes, and related hydrides. The hydroboration of alkynes gives vinylic boranes which oxidize to the corresponding aldehyde or ketone. In the thiol-yne reaction the substrate is a thiol.

Addition of hydrogen halides has long been of interest. In the presence of mercuric chloride as a catalyst, acetylene and hydrogen chloride react to give vinyl chloride. While this method has been abandoned in the West, it remains the main production method in China.[11]

The hydration reaction of acetylene gives acetaldehyde. The reaction proceeds by formation of vinyl alcohol, which undergoes tautomerizes to form the aldehyde. This reaction was once a major industrial process but it has been displaced by the Wacker process. This reaction occurs in nature, the catalyst being acetylene hydratase.

Alkynes undergo diverse cycloaddition reactions. The Diels–Alder reaction with 1,3-dienes give 1,4-cyclohexadienes. This general reaction has been extensively developed. Electrophilic alkynes are especially effective dienophiles. The "cycloadduct" derived from the addition of alkynes to 2-pyrone eliminates carbon dioxide to give the aromatic compound. Other specialized cycloadditions include multicomponent reactions such as alkyne trimerisation to give aromatic compounds and the [2+2+1]-cycloaddition of an alkyne, alkene and carbon monoxide in the Pauson–Khand reaction. Non-carbon reagents also undergo cyclization, e.g. Azide alkyne Huisgen cycloaddition to give triazoles. Cycloaddition processes involving alkynes are often catalyzed by metals, e.g. enyne metathesis and alkyne metathesis, which allows the scrambling of carbyne (RC) centers:

Oxidative cleavage of alkynes proceeds via cycloaddition to metal oxides. Most famously, potassium permanganate converts alkynes to a pair of carboxylic acids.

Terminal alkynes are readily converted to many derivatives, e.g. by coupling reactions and condensations. Via the condensation with formaldehyde and acetylene is produced butynediol:[5][14]

In the Sonogashira reaction, terminal alkynes are coupled with aryl or vinyl halides:

This reactivity exploits the fact that terminal alkynes are weak acids, whose typical pKa values around 25 place them between that of ammonia (35) and ethanol (16):

The reactions of alkynes with certain metal cations, e.g. Ag+ and Cu+ also gives acetylides. Thus, few drops of diamminesilver(I) hydroxide (Ag(NH3)2OH) reacts with terminal alkynes signaled by formation of a white precipitate of the silver acetylide. This reactivity is the basis of alkyne coupling reactions, including the Cadiot–Chodkiewicz coupling, Glaser coupling, and the Eglinton coupling:[15]

In the Favorskii reaction and in alkynylations in general, terminal alkynes add to carbonyl compounds to give the hydroxyalkyne.

Alkynes form complexes with transition metals. Such complexes occur also in metal catalyzed reactions of alkynes such as alkyne trimerization. Terminal alkynes, including acetylene itself, react with water to give aldehydes. The transformation typically requires metal catalysts to give this anti-Markovnikov addition result.[16]

Alkynes in nature and medicine

According to Ferdinand Bohlmann, the first naturally occurring acetylenic compound, dehydromatricaria ester, was isolated from an Artemisia species in 1826. In the nearly two centuries that have followed, well over a thousand naturally occurring acetylenes have been discovered and reported. Polyynes, a subset of this class of natural products, have been isolated from a wide variety of plant species, cultures of higher fungi, bacteria, marine sponges, and corals.[17] Some acids like tariric acid contain an alkyne group. Diynes and triynes, species with the linkage RC≡C–C≡CR′ and RC≡C–C≡C–C≡CR′ respectively, occur in certain plants (Ichthyothere, Chrysanthemum, Cicuta, Oenanthe and other members of the Asteraceae and Apiaceae families). Some examples are cicutoxin, oenanthotoxin, and falcarinol . These compounds are highly bioactive, e.g. as nematocides.[18] 1-Phenylhepta-1,3,5-triyne is illustrative of a naturally occurring triyne.

Alkynes occur in some pharmaceuticals, including the contraceptive noretynodrel. A carbon–carbon triple bond is also present in marketed drugs such as the antiretroviral Efavirenz and the antifungal Terbinafine. Molecules called ene-diynes feature a ring containing an alkene ("ene") between two alkyne groups ("diyne"). These compounds, e.g. calicheamicin, are some of the most aggressive antitumor drugs known, so much so that the ene-diyne subunit is sometimes referred to as a "warhead". Ene-diynes undergo rearrangement via the Bergman cyclization, generating highly reactive radical intermediates that attack DNA within the tumor.[19]