Cerium(IV) oxide, also known as ceric oxide, ceric dioxide, ceria, cerium oxide or cerium dioxide, is an oxide of the rare-earth metal cerium. It is a pale yellow-white powder with the chemical formula CeO2. It is an important commercial product and an intermediate in the purification of the element from the ores. The distinctive property of this material is its reversible conversion to a non-stoichiometric oxide.[3]

Cerium occurs naturally as a mixture with other rare-earth elements in its principal ores bastnaesite and monazite. After extraction of the metal ions into aqueous base, Ce is separated from that mixture by addition of an oxidant followed by adjustment of the pH. This step exploits the low solubility of CeO2 and the fact that other rare-earth elements resist oxidation.[3]

Cerium(IV) oxide is formed by the calcination of cerium oxalate or cerium hydroxide.

Cerium also forms cerium(III) oxide, Ce2O3, which is unstable and will oxidize to cerium(IV) oxide.[4]

Cerium oxide adopts the fluorite structure, space group Fm3m, #225 containing 8-coordinate Ce4+ and 4-coordinate O2−. At high temperatures it releases oxygen to give a non-stoichiometric, anion deficient form that retains the fluorite lattice.[5] This material has the formula CeO(2−x), where 0 < x < 0.28.[6] The value of x depends on both the temperature, surface termination and the oxygen partial pressure. The equation

The non-stoichiometric form has a blue to black color, and exhibits both ionic and electronic conduction with ionic being the most significant at temperatures > 500 °C.[8]

The number of oxygen vacancies is frequently measured by using X-ray photoelectron spectroscopy to compare the ratio of Ce3+to Ce4+.

In the most stable fluorite phase of ceria, it exhibits several defects depending on partial pressure of oxygen or stress state of the material.[9][10][11][12]

The primary defects of concern are oxygen vacancies and small polarons (electrons localized on cerium cations). Increasing the concentration of oxygen defects increases the diffusion rate of oxide anions in the lattice as reflected in an increase in ionic conductivity. These factors give ceria favorable performance in applications as a solid electrolyte in solid-oxide fuel cells. Undoped and doped ceria also exhibit high electronic conductivity at low partial pressures of oxygen due to reduction of the cerium ion leading to the formation of small polarons. Since the oxygen atoms in a ceria crystal occur in planes, diffusion of these anions is facile. The diffusion rate increases as the defect concentration increases.

The presence of oxygen vacancies at terminating ceria planes governs the energetics of ceria interactions with adsorbate molecules, and its wettability. Controlling such surface interactions is key to harnessing ceria in catalytic applications.[13]

Cerium(IV) oxide occurs naturally as the mineral cerianite-(Ce).[14][15] It is a rare example of tetravalent cerium mineral, the other examples being stetindite-(Ce) and dyrnaesite-(La). The "-(Ce)" suffix is known as Levinson modifier and is used to show which element dominates in a particular site in the structure.[16] It is often found in names of minerals bearing rare earth elements (REEs). Occurrence of cerianite-(Ce) is related to some examples of cerium anomaly, where Ce - which is oxidized easily - is separated from other REEs that remain trivalent and thus fit to structures of other minerals than cerianite-(Ce).[17][14][15]

The primary emerging application of applied CeO2 materials is in the field of catalysis. Surfaces of ceria, in its most stable fluorite phase, are dominated by the lower energy (111) planes, which tend to exhibit lower surface energy. The reaction most commonly catalysed by cerium(IV) is the water gas shift reaction, involving the oxidation of carbon monoxide. Ceria has been explored towards the catalysis of various hydrocarbon conversion reactions including CO2 methanation and the catalytic oxidation of hydrocarbons such as toluene.[18][19]

The surface functionality of CeO2 stems largely from its intrinsic hydrophobicity, a trait that is common among rare earth oxides.[13] Hydrophobicity tends to impart resistance to water-deactivation at the surfaces of catalysts and thus enhances the adsorption of organic compounds. Hydrophobicity, which can be conversely seen as organophilicity, is generally associated with higher catalytic performance and is desired in applications involving organic compounds and selective synthesis.[20]

The interconvertibility of CeOx materials is the basis of the use of ceria for an oxidation catalyst. One small but illustrative use is its use in the walls of self-cleaning ovens as a hydrocarbon oxidation catalyst during the high-temperature cleaning process. Another small scale but famous example is its role in oxidation of natural gas in gas mantles.[21] 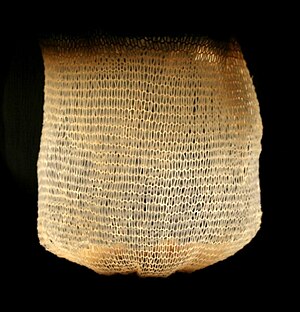 A glowing Coleman white gas lantern mantle. The glowing element is mainly ThO2 doped with CeO2, heated by the Ce-catalyzed oxidation of the natural gas with air.

Building on its distinct surface interactions, ceria finds further use as a sensor in catalytic converters in automotive applications, controlling the air-exhaust ratio to reduce NOx and carbon monoxide emissions.[22]

The principal industrial application of ceria is for polishing, especially chemical-mechanical planarization (CMP).[3] For this purpose, it has displaced many other oxides that were previously used, such as iron oxide and zirconia. For hobbyists, it is also known as "opticians' rouge".[23][24]

Cerium oxide has found use in infrared filters, as an oxidizing species in catalytic converters and as a replacement for thorium dioxide in incandescent mantles[25]

Due to the significant ionic and electronic conduction of cerium oxide, it is well suited to be used as a mixed conductor,[26] with significant value in fuel cell research and development.

Cerium oxide nanoparticles (nanoceria) have been investigated for their antibacterial and antioxidant activity.[27]

Cerium oxide is used as an addition to Tungsten electrodes for Gas Tungsten Arc Welding. It provides advantages over pure Tungsten electrodes such as reducing electrode consumption rate and easier arc starting & stability. Ceria electrodes were first introduced in the US market in 1987, and are useful in AC, DC Electrode Positive, and DC Electrode Negative. More details on these electrodes can be found in ASME BPVC.II.C SFA-5.12 Annex B.

While it is transparent for visible light, it absorbs ultraviolet radiation strongly, so it is a prospective replacement of zinc oxide and titanium dioxide in sunscreens, as it has lower photocatalytic activity.[28] However, its thermal catalytic properties have to be decreased by coating the particles with amorphous silica or boron nitride.

Ceria is of interest as a material for solid oxide fuel cells (SOFCs) because of its relatively high oxygen ion conductivity (i.e. oxygen atoms readily move through it) at intermediate temperatures (500–650 °C) and lower association enthalpy compared to Zirconia system.[29]

Nanoceria has attracted attention as a biological antioxidant.[31] [32]