Estimation statistics, or simply estimation, is a data analysis framework that uses a combination of effect sizes, confidence intervals, precision planning, and meta-analysis to plan experiments, analyze data and interpret results.[1] It complements hypothesis testing approaches such as null hypothesis significance testing (NHST), by going beyond the question is an effect present or not, and provides information about how large an effect is.[2][3] Estimation statistics is sometimes referred to as the new statistics.[3][4][5]

Starting in 1929, physicist Raymond Thayer Birge published review papers[10] in which he used weighted-averages methods to calculate estimates of physical constants, a procedure that can be seen as the precursor to modern meta-analysis.[11]

In the 1960s, estimation statistics was adopted by the non-physical sciences with the development of the standardized effect size by Jacob Cohen.

In the 1970s, modern research synthesis was pioneered by Gene V. Glass with the first systematic review and meta-analysis for psychotherapy.[12] This pioneering work subsequently influenced the adoption of meta-analyses for medical treatments more generally.

In the 1980s and 1990s, estimation methods were extended and refined by biostatisticians including Larry Hedges, Michael Borenstein, Doug Altman, Martin Gardner, and many others, with the development of the modern (medical) meta-analysis.

Starting in the 1980s, the systematic review, used in conjunction with meta-analysis, became a technique widely used in medical research. There are over 200,000 citations to "meta-analysis" in PubMed.

In the 1990s, editor Kenneth Rothman banned the use of p-values from the journal Epidemiology; compliance was high among authors but this did not substantially change their analytical thinking.[13]

In 2013, the Publication Manual of the American Psychological Association recommended to use estimation in addition to hypothesis testing.[17] Also in 2013, the Uniform Requirements for Manuscripts Submitted to Biomedical Journals document made a similar recommendation: "Avoid relying solely on statistical hypothesis testing, such as P values, which fail to convey important information about effect size."[18]

In 2019, over 800 scientists signed an open comment calling for the entire concept of statistical significance to be abandoned.[19]

In 2019, the Society for Neuroscience journal eNeuro instituted a policy recommending the use of estimation graphics as the preferred method for data presentation.[20] And in 2022, the International Society of Physiotherapy Journal Editors recommended the use of estimation methods instead of null hypothesis statistical tests.[21]

Despite the widespread adoption of meta-analysis for clinical research, and recommendations by several major publishing institutions, the estimation framework is not routinely used in primary biomedical research.[22]

Many significance tests have an estimation counterpart;[23] in almost every case, the test result (or its p-value) can be simply substituted with the effect size and a precision estimate. For example, instead of using Student's t-test, the analyst can compare two independent groups by calculating the mean difference and its 95% confidence interval. Corresponding methods can be used for a paired t-test and multiple comparisons. Similarly, for a regression analysis, an analyst would report the coefficient of determination (R2) and the model equation instead of the model's p-value.

However, proponents of estimation statistics warn against reporting only a few numbers. Rather, it is advised to analyze and present data using data visualization.[2][5][6] Examples of appropriate visualizations include the Scatter plot for regression, and Gardner-Altman plots for two independent groups.[24] While historical data-group plots (bar charts, box plots, and violin plots) do not display the comparison, estimation plots add a second axis to explicitly visualize the effect size.[25]

The Gardner–Altman mean difference plot was first described by Martin Gardner and Doug Altman in 1986;[24] it is a statistical graph designed to display data from two independent groups.[5] There is also a version suitable for paired data. The key instructions to make this chart are as follows: (1) display all observed values for both groups side-by-side; (2) place a second axis on the right, shifted to show the mean difference scale; and (3) plot the mean difference with its confidence interval as a marker with error bars.[3] Gardner-Altman plots can be generated with DABEST-Python, or dabestr; alternatively, the analyst can use GUI software like the Estimation Stats app. 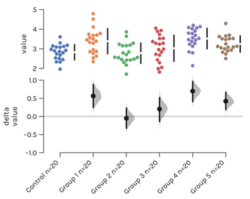 In addition to the mean difference, there are numerous other effect size types, all with relative benefits. Major types include effect sizes in the Cohen's d class of standardized metrics, and the coefficient of determination (R2) for regression analysis. For non-normal distributions, there are a number of more robust effect sizes, including Cliff's delta and the Kolmogorov-Smirnov statistic.

The precision of an estimate is formally defined as 1/variance, and like power, increases (improves) with increasing sample size. Like power, a high level of precision is expensive; research grant applications would ideally include precision/cost analyses. Proponents of estimation believe precision planning should replace power since statistical power itself is conceptually linked to significance testing.[3] Precision planning can be done with the ESCI web app.