In null-hypothesis significance testing, the p-value[note 1] is the probability of obtaining test results at least as extreme as the result actually observed, under the assumption that the null hypothesis is correct.[2][3] A very small p-value means that such an extreme observed outcome would be very unlikely under the null hypothesis. Reporting p-values of statistical tests is common practice in academic publications of many quantitative fields. Since the precise meaning of p-value is hard to grasp, misuse is widespread and has been a major topic in metascience.[4][5]

In statistics, every conjecture concerning the unknown probability distribution of a collection of random variables representing the observed data [math]\displaystyle{ X }[/math] in some study is called a statistical hypothesis. If we state one hypothesis only and the aim of the statistical test is to see whether this hypothesis is tenable, but not to investigate other specific hypotheses, then such a test is called a null hypothesis test.

As our statistical hypothesis will, by definition, state some property of the distribution, the null hypothesis is the default hypothesis under which that property does not exist. The null hypothesis is typically that some parameter (such as a correlation or a difference between means) in the populations of interest is zero. Note that our hypothesis might specify the probability distribution of [math]\displaystyle{ X }[/math] precisely, or it might only specify that it belongs to some class of distributions. Often, we reduce the data to a single numerical statistic, e.g., [math]\displaystyle{ T }[/math], whose marginal probability distribution is closely connected to a main question of interest in the study.

Loosely speaking, rejection of the null hypothesis implies that there is sufficient evidence against it.

The definition of p-value is simple and unambiguous when there is a natural test statistic with a unimodal distribution on the real line. However, there are more than one way to generalize it to other situations, with varying degrees of abstraction, and there is no general consensus on the "best" generalization. 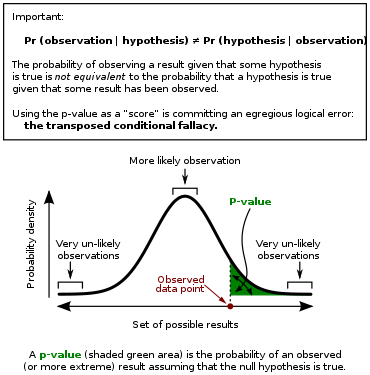 The above definition requires the test statistic to [math]\displaystyle{ t }[/math] be a real number, or at least totally ordered. When there is no natural real-valued test statistic to compute, such as when the observed data is categorical, a more abstract definition of p-value is as follows:

This generalizes to the continuous case:

Any of the three p-values defined by a real-valued test statistic [math]\displaystyle{ T }[/math] is a special case of this more abstract p-value, or a slightly modified version of it:

A yet more abstract definition does not require any ordered statistic, or concept of "extremeness".[6]

This more abstract definition includes the previous definitions as special cases, and it is designed exactly for the purpose of allowing significance tests.

p-value as the statistic for performing significance tests

Further, the research does not need to provide the threshold value [math]\displaystyle{ \alpha }[/math]. If the researcher reports the exact p-value, such as "p=0.03", then a reader can supply their own [math]\displaystyle{ \alpha }[/math], and construct their own significance test. In this sense, an exactly reported p-value encapsulates the result of a whole family of significance tests.[6]

Different p-values based on independent sets of data can be combined, for instance using Fisher's combined probability test.

When the null hypothesis is true, if it takes the form [math]\displaystyle{ H_0: \theta = \theta_0 }[/math], and the underlying random variable is continuous, then the probability distribution of the p-value is uniform on the interval [0,1]. By contrast, if the alternative hypothesis is true, the distribution is dependent on sample size and the true value of the parameter being studied.[7][8]

The distribution of p-values for a group of studies is sometimes called a p-curve.[9] A p-curve can be used to assess the reliability of scientific literature, such as by detecting publication bias or p-hacking.[9][10]

In parametric hypothesis testing problems, a simple or point hypothesis refers to a hypothesis where the parameter's value is assumed to be a single number. In contrast, in a composite hypothesis the parameter's value is given by a set of numbers. For example, when testing the null hypothesis that a distribution is normal with a mean less than or equal to zero against the alternative that the mean is greater than zero (variance known), the null hypothesis does not specify the probability distribution of the appropriate test statistic. In the just mentioned example that would be the Z-statistic belonging to the one-sided one-sample Z-test. For each possible value of the theoretical mean, the Z-test statistic has a different probability distribution. In these circumstances (the case of a so-called composite null hypothesis) the p-value is defined by taking the least favourable null-hypothesis case, which is typically on the border between null and alternative.

This definition ensures the complementarity of p-values and alpha-levels. If we set the significance level alpha to 0.05, and only reject the null hypothesis if the p-value is less than or equal to 0.05, then our hypothesis test will indeed have significance level (maximal type 1 error rate) 0.05. As Neyman wrote: “The error that a practising statistician would consider the more important to avoid (which is a subjective judgment) is called the error of the first kind. The first demand of the mathematical theory is to deduce such test criteria as would ensure that the probability of committing an error of the first kind would equal (or approximately equal, or not exceed) a preassigned number α, such as α = 0.05 or 0.01, etc. This number is called the level of significance”; Neyman 1976, p. 161 in "The Emergence of Mathematical Statistics: A Historical Sketch with Particular Reference to the United States","On the History of Statistics and Probability", ed. D.B. Owen, New York: Marcel Dekker, pp. 149-193. See also "Confusion Over Measures of Evidence (p's) Versus Errors (a's) in Classical Statistical Testing", Raymond Hubbard and M. J. Bayarri, The American Statistician, August 2003, Vol. 57, No 3, 171--182 (with discussion). For a concise modern statement see Chapter 10 of "All of Statistics: A Concise Course in Statistical Inference", Springer; 1st Corrected ed. 20 edition (September 17, 2004). Larry Wasserman.

According to the ASA, there is widespread agreement that p-values are often misused and misinterpreted.[3] One practice that has been particularly criticized is accepting the alternative hypothesis for any p-value nominally less than .05 without other supporting evidence. Although p-values are helpful in assessing how incompatible the data are with a specified statistical model, contextual factors must also be considered, such as "the design of a study, the quality of the measurements, the external evidence for the phenomenon under study, and the validity of assumptions that underlie the data analysis".[3] Another concern is that the p-value is often misunderstood as being the probability that the null hypothesis is true.[3][12]

Some statisticians have proposed abandoning p-values and focusing more on other inferential statistics,[3] such as confidence intervals,[13][14] likelihood ratios,[15][16] or Bayes factors,[17][18][19] but there is heated debate on the feasibility of these alternatives.[20]Cite error: Closing </ref> missing for <ref> tag John Arbuthnot studied this question in 1710,[21][22][23][24] and examined birth records in London for each of the 82 years from 1629 to 1710. In every year, the number of males born in London exceeded the number of females. Considering more male or more female births as equally likely, the probability of the observed outcome is 1/282, or about 1 in 4,836,000,000,000,000,000,000,000; in modern terms, the p-value. This is vanishingly small, leading Arbuthnot that this was not due to chance, but to divine providence: "From whence it follows, that it is Art, not Chance, that governs." In modern terms, he rejected the null hypothesis of equally likely male and female births at the p = 1/282 significance level. This and other work by Arbuthnot is credited as "… the first use of significance tests …"[25] the first example of reasoning about statistical significance,[26] and "… perhaps the first published report of a nonparametric test …",[22] specifically the sign test; see details at Sign test § History.

The same question was later addressed by Pierre-Simon Laplace, who instead used a parametric test, modeling the number of male births with a binomial distribution:[27]

In the 1770s Laplace considered the statistics of almost half a million births. The statistics showed an excess of boys compared to girls. He concluded by calculation of a p-value that the excess was a real, but unexplained, effect.

The use of the p-value in statistics was popularized by Ronald Fisher,[29] and it plays a central role in his approach to the subject.[30] In his influential book Statistical Methods for Research Workers (1925), Fisher proposed the level p = 0.05, or a 1 in 20 chance of being exceeded by chance, as a limit for statistical significance, and applied this to a normal distribution (as a two-tailed test), thus yielding the rule of two standard deviations (on a normal distribution) for statistical significance (see 68–95–99.7 rule).[31][note 3][32]

As an illustration of the application of p-values to the design and interpretation of experiments, in his following book The Design of Experiments (1935), Fisher presented the lady tasting tea experiment,[34] which is the archetypal example of the p-value.

To evaluate a lady's claim that she (Muriel Bristol) could distinguish by taste how tea is prepared (first adding the milk to the cup, then the tea, or first tea, then milk), she was sequentially presented with 8 cups: 4 prepared one way, 4 prepared the other, and asked to determine the preparation of each cup (knowing that there were 4 of each). In that case, the null hypothesis was that she had no special ability, the test was Fisher's exact test, and the p-value was [math]\displaystyle{ 1/\binom{8}{4} = 1/70 \approx 0.014, }[/math] so Fisher was willing to reject the null hypothesis (consider the outcome highly unlikely to be due to chance) if all were classified correctly. (In the actual experiment, Bristol correctly classified all 8 cups.)

Fisher reiterated the p = 0.05 threshold and explained its rationale, stating:[35]

It is usual and convenient for experimenters to take 5 per cent as a standard level of significance, in the sense that they are prepared to ignore all results which fail to reach this standard, and, by this means, to eliminate from further discussion the greater part of the fluctuations which chance causes have introduced into their experimental results.

He also applies this threshold to the design of experiments, noting that had only 6 cups been presented (3 of each), a perfect classification would have only yielded a p-value of [math]\displaystyle{ 1/\binom{6}{3} = 1/20 = 0.05, }[/math] which would not have met this level of significance.[35] Fisher also underlined the interpretation of p, as the long-run proportion of values at least as extreme as the data, assuming the null hypothesis is true.

In later editions, Fisher explicitly contrasted the use of the p-value for statistical inference in science with the Neyman–Pearson method, which he terms "Acceptance Procedures".[36] Fisher emphasizes that while fixed levels such as 5%, 2%, and 1% are convenient, the exact p-value can be used, and the strength of evidence can and will be revised with further experimentation. In contrast, decision procedures require a clear-cut decision, yielding an irreversible action, and the procedure is based on costs of error, which, he argues, are inapplicable to scientific research.

The E-value corresponds to the expected number of times in multiple testing that one expects to obtain a test statistic at least as extreme as the one that was actually observed if one assumes that the null hypothesis is true.[37] The E-value is the product of the number of tests and the p-value.

The q-value is the analog of the p-value with respect to the positive false discovery rate.[38] It is used in multiple hypothesis testing to maintain statistical power while minimizing the false positive rate.[39]

The Probability of Direction (pd) is the Bayesian numerical equivalent of the p-value.[40] It corresponds to the proportion of the posterior distribution that is of the median's sign, typically varying between 50% and 100%, and representing the certainty with which an effect is positive or negative.