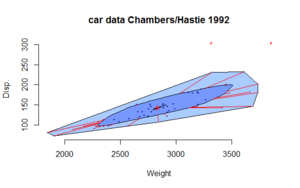 Example of a bagplot created in R.

A bagplot, or starburst plot,[1][2] is a method in robust statistics for visualizing two- or three-dimensional statistical data, analogous to the one-dimensional box plot. Introduced in 1999 by Rousseuw et al., the bagplot allows one to visualize the location, spread, skewness, and outliers of a data set.[3]

The bagplot consists of three nested polygons, called the "bag", the "fence", and the "loop".

An asterisk symbol (*) near the center of the graph is used to mark the depth median, the point with the highest possible Tukey depth. The observations between the bag and fence are marked by line segments, on a line to the depth median, connecting them to the bag.
The three-dimensional version consists of an inner and outer bag.[7] The outer bag must be drawn in transparent colors so that the inner bag remains visible.

The bagplot is invariant under affine transformations of the plane, and robust against outliers.[8]