S-Adenosyl methionine (SAM-e) is a common cosubstrate involved in methyl group transfers, transsulfuration, and aminopropylation. Although these anabolic reactions occur throughout the body, most SAM-e is produced and consumed in the liver.[1] More than 40 methyl transfers from SAM-e are known, to various substrates such as nucleic acids, proteins, lipids and secondary metabolites. It is made from adenosine triphosphate (ATP) and methionine by methionine adenosyltransferase. SAM-e was first discovered by Giulio Cantoni in 1952.[1]

In bacteria, SAM-e is bound by the SAM riboswitch, which regulates genes involved in methionine or cysteine biosynthesis. In eukaryotic cells, SAM-e serves as a regulator of a variety of processes including DNA, tRNA, and rRNA methylation; immune response;[2] amino acid metabolism; transsulfuration; and more. In plants, SAM-e is crucial to the biosynthesis of ethylene, an important plant hormone and signaling molecule.[3] 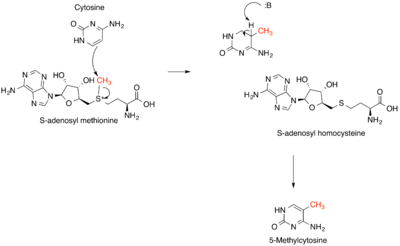 The SN2-like methyl transfer reaction. Only the SAM cofactor and cytosine base are shown for simplicity.

The reactions that produce, consume, and regenerate SAM-e are called the SAM-e cycle. In the first step of this cycle, the SAM-dependent methylases (EC 2.1.1) that use SAM-e as a substrate produce S-adenosyl homocysteine as a product.[4] S-Adenosyl homocysteine is a strong negative regulator of nearly all SAM-dependent methylases despite their biological diversity. This is hydrolysed to homocysteine and adenosine by S-adenosylhomocysteine hydrolase EC 3.3.1.1 and the homocysteine recycled back to methionine through transfer of a methyl group from 5-methyltetrahydrofolate, by one of the two classes of methionine synthases (i.e. cobalamin-dependent (EC 2.1.1.13) or cobalamin-independent (EC 2.1.1.14)). This methionine can then be converted back to SAM-e, completing the cycle.[5] In the rate-limiting step of the SAM cycle, MTHFR (methylenetetrahydrofolate reductase) irreversibly reduces 5,10-methylenetetrahydrofolate to 5-methyltetrahydrofolate.[6]

A large number of iron-sulfur cluster-containing enzymes cleave SAM-e reductively to produce a 5′-deoxyadenosyl 5′-radical as an intermediate, and are called radical SAM enzymes.[7] Most enzymes with this capability share a region of sequence homology that includes the motif CxxxCxxC or a close variant. The radical intermediate allows enzymes to perform a wide variety of unusual chemical reactions. Examples of radical SAM enzymes include spore photoproduct lyase, activases of pyruvate formate lyase and anaerobic sulfatases, lysine 2,3-aminomutase, and various enzymes of cofactor biosynthesis, peptide modification, metalloprotein cluster formation, tRNA modification, lipid metabolism, etc. Some radical SAM-e enzymes use a second SAM-e as a methyl donor. Radical SAM enzymes are much more abundant in anaerobic bacteria than in aerobic organisms. They can be found in all domains of life and are largely unexplored. A recent bioinformatics study concluded that this family of enzymes includes at least 114,000 sequences including 65 unique reactions.[8]

SAM-e is required for cellular growth and repair. It is also involved in the biosynthesis of several hormones and neurotransmitters that affect mood, such as epinephrine. Methyltransferases are also responsible for the addition of methyl groups to the 2′ hydroxyls of the first and second nucleotides next to the 5′ cap in messenger RNA.[10][11]

As of 2012 the evidence was inconclusive as to whether SAM can mitigate the pain of osteoarthritis; clinical trials that had been conducted were too small from which to generalize.[12]

The SAM-e cycle has been closely tied to the liver since 1947 because people with alcoholic cirrhosis of the liver would accumulate large amounts of methionine in their blood.[13] While multiple lines of evidence from laboratory tests on cells and animal models suggest that SAM might be useful to treat various liver diseases, as of 2012 SAM had not been studied in any large randomized placebo-controlled clinical trials that would allow an assessment of its efficacy and safety.[14][15]

A 2016 Cochrane review concluded that for major depressive disorder, "Given the absence of high quality evidence and the inability to draw firm conclusions based on that evidence, the use of SAMe for the treatment of depression in adults should be investigated further."[16]

Oral SAM achieves peak plasma concentrations three to five hours after ingestion of an enteric-coated tablet (400–1000 mg). The half-life is about 100 minutes.[18]

Gastrointestinal disorder, dyspepsia and anxiety can occur with SAM consumption.[18] Long-term effects are unknown. SAM is a weak DNA-alkylating agent.[19]

Another reported side effect of SAM is insomnia; therefore, the supplement is often taken in the morning. Other reports of mild side effects include lack of appetite, constipation, nausea, dry mouth, sweating, and anxiety/nervousness, but in placebo-controlled studies, these side effects occur at about the same incidence in the placebo groups.

SAM-e has recently been shown to play a role in epigenetic regulation. DNA methylation is a key regulator in epigenetic modification during mammalian cell development and differentiation. In mouse models, excess levels of SAM-e have been implicated in erroneous methylation patterns associated with diabetic neuropathy. SAM-e serves as the methyl donor in cytosine methylation, which is a key epigenetic regulatory process.[20] Because of this impact on epigenetic regulation, SAM-e has been tested as an anti-cancer treatment. Cancer cell proliferation is dependent on having low levels of DNA methylation. In vitro addition has been shown to remethylate promoter sequences and decrease the production of proto-oncogenes.[21]

Deficiencies in radical SAM-e enzymes have been associated with a variety of diseases including congenital heart disease, amyotrophic lateral sclerosis, and increased viral susceptibility.[8]

Taking SAM at the same time as some drugs may increase the risk of serotonin syndrome, a potentially dangerous condition caused by having too much serotonin. These drugs include dextromethorphan (Robitussin), meperidine (Demerol), pentazocine (Talwin), and tramadol (Ultram).

SAM may also interact with antidepressant medications — including tryptophan and Hypericum perforatum (St. John’s wort) — increasing the potential for serotonin syndrome or other side effects, and may reduce the effectiveness of levodopa for Parkinson's disease.[22]

People who have bipolar disorder should not use SAM because it increases the risk of manic episodes.[22]

In the United States and Canada , SAM is sold as a dietary supplement under the marketing name SAM-e (also spelled SAME or SAMe; pronounced "Sammy";[23]) it was introduced in the US in 1999, after the Dietary Supplement Health and Education Act was passed in 1994.[24]