Stereographic projection map showing the density distribution of dune fields in the Planum Boreum region. The grey regions are lower density fields. The four densest dune fields are shown in black. The prime meridian is at the bottom of the map. Hyperboreae Undae is shown on the left, between longitude 302.92°E to 316.02°E (43.98°W – 57.08°W).

Hyperboreae Undae dunes shown with surface frost. The dunes become darker when the frost sublimates from solar heating and the dark sands are revealed.

Although the dunes surrounding the Martian north pole show no signs of movement, two possible exceptions may be the dunes in parts of Abalos Undae, and the dunes of Hyperboreae Undae.[3] In the case of Hyperboreae Undae, the dunes close to its eastern boundary appear to be buried under the Planum Boreum 3 unit. At that area, some of the dunes exhibit dark streaks that may have been caused by katabatic winds.[3] This may indicate sand movement, due to Aeolian activity, which is recent enough to retain the streaks, otherwise these marks tend to disappear with time; other dunes do not exhibit such marks.[3]

The dunes of Hyperboreae Undae, according to data provided by the Compact Reconnaissance Imaging Spectrometer for Mars, exhibit the weakest signature for the presence of surface ice in the area of Chasma Boreale.[3] Hyperboreae Undae, along with Abalos and Siton Undae, contributes sand to mainly medium-density dune fields east of Olympia Undae and extending to the Martian prime meridian,[1]

Image analysis research, using the method of spectral derivatives, has indicated that Hyperboreae Undae, as well as the other dense officially-named northern circumpolar dune fields (Olympia Undae, Abalos Undae, and Siton Undae), show the highest density of gypsum in the area.[6] A geomorphic comparison of Hyperboreae Undae with Rub' al Khali, Earth's largest contiguous dune field, has determined that the morphologies of the two ergs follow similar developmental patterns.[7]

Coexistence of linear and barchan forms 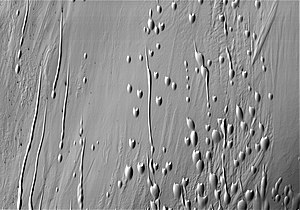 Another study,[10] proposes that the linear dunes have become crusty (indurated), and thus resistant to changing form with changing wind directions. The study also proposes that the bimodal wind direction changed with time to unidirectional, which would produce barchan-type dunes, while the preexisting indurated linear dunes, due to their hardening, would remain in place.[5] This theory is plausible, although it cannot be easily verified, because the time profile of the wind patterns for Hyperboreae Undae would need to be recovered.[5]

A third study combines images taken by the High Resolution Imaging Science Experiment (HiRISE) camera on board the Mars Reconnaissance Orbiter with the deployment of the Mars Orbiter Laser Altimeter (MOLA) to obtain local coordinates of the topography shown in the HiRISE images, and then maps the HiRISE image data into a computer simulation which registers the spatial computer model of the local topography of Hyperboreae Undae in the vicinity of Boreum Cavus. From the crestline orientation of the numerical model, the local wind vectors can be computed, and the results can then be compared to the measured wind data of the area under investigation. Conversely, if the wind vectors are known, the bedform morphology can be predicted.[5] By comparing the numerical simulation results to measured real-world data, the computer simulation parameters can be refined, leading to better convergence between numerically-predicted and field-measured results.[5] Limitations for the computer model include the resolution limits of the numerical model, the small area under investigation, and the complexity of the local wind conditions.[5] The numerical study obtained results that demonstrate that Hyperboreae Undae was formed under modern wind conditions and that its form, the coexistence of barchan and linear dunes, can be established by the numerical model.[5] Further research plans include the extension of the field of study to include modelling all of Hyperboreae Undae.[5]

Images from THEMIS and HiRISE