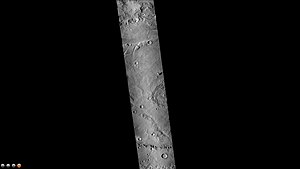 Maggini is a large Martian impact crater in northwestern Arabia Terra, located in the Arabia quadrangle at 28.0° N and 350.6° W. It measures 143.0 kilometers in diameter and was named after Mentore Maggini. The name was approved by IAU's Working Group for Planetary System Nomenclature in 1973.[1]

The Maggini crater region was observed to have three distinctive sets of wrinkle ridges by Finnish researchers in 1992 - with each set striking to the northwest, the northeast, and the north, respectively. The northwest-striking wrinkle ridge set is thought to have originated from a global compressive event, as similar ridges are observed in Antoniadi crater (in Syrtis Major Planum to the east) and in Schiaparelli crater (in Terra Sabaea to the south). None of the three wrinkle ridge sets dominate any of the other.[2]