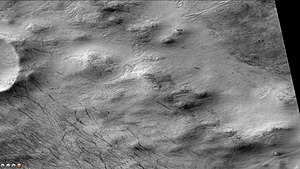 Dust devil tracks, as seen by CTX camera (on Mars Reconnaissance Orbiter). Note: this is an enlargement of the previous image of Campbell Crater.

Campbell Crater is an impact crater in the Eridania quadrangle of Mars, located at 54.7°S latitude and 165.6°E longitude. It is 129.0 km in diameter and was named after Canadian physicist John W. Campbell and American astronomer William Wallace Campbell, and the name was approved in 1973 by the International Astronomical Union (IAU) Working Group for Planetary System Nomenclature (WGPSN).[1]

Dust devil tracks have been seen in Campbell Crater. Many areas on Mars experience the passage of giant dust devils. These dust devils leave tracks on the surface of Mars because they disturb a thin coating of fine bright dust that covers most of the Martian surface. When a dust devil goes by it blows away the coating and exposes the underlying dark surface. Within a few weeks, the dark track assumes its former bright color.