Aldosterone is the main mineralocorticoid steroid hormone produced by the zona glomerulosa of the adrenal cortex in the adrenal gland.[1][2] It is essential for sodium conservation in the kidney, salivary glands, sweat glands, and colon.[3] It plays a central role in the homeostatic regulation of blood pressure, plasma sodium (Na+), and potassium (K+) levels. It does so primarily by acting on the mineralocorticoid receptors in the distal tubules and collecting ducts of the nephron.[3] It influences the reabsorption of sodium and excretion of potassium (from and into the tubular fluids, respectively) of the kidney, thereby indirectly influencing water retention or loss, blood pressure and blood volume.[4] When dysregulated, aldosterone is pathogenic and contributes to the development and progression of cardiovascular and kidney disease.[5] Aldosterone has exactly the opposite function of the atrial natriuretic hormone secreted by the heart.[4]

Aldosterone is part of the renin–angiotensin–aldosterone system. It has a plasma half-life of less than 20 minutes.[6] Drugs that interfere with the secretion or action of aldosterone are in use as antihypertensives, like lisinopril, which lowers blood pressure by blocking the angiotensin-converting enzyme (ACE), leading to lower aldosterone secretion. The net effect of these drugs is to reduce sodium and water retention but increase retention of potassium. In other words, these drugs stimulate the excretion of sodium and water in urine, while they block the excretion of potassium.

Another example is spironolactone, a potassium-sparing diuretic of the steroidal spirolactone group, which interferes with the aldosterone receptor (among others) leading to lower blood pressure by the mechanism described above.

Aldosterone was first isolated by Simpson and Tait in 1953.[7]

The corticosteroids are synthesized from cholesterol within the zona glomerulosa of adrenal cortex. Most steroidogenic reactions are catalysed by enzymes of the cytochrome P450 family. They are located within the mitochondria and require adrenodoxin as a cofactor (except 21-hydroxylase and 17α-hydroxylase). 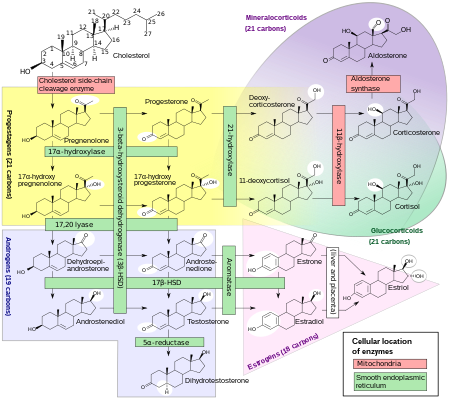 Note: aldosterone synthase is absent in other sections of the adrenal gland.

The secretion of aldosterone has a diurnal rhythm.[10]

Aldosterone is the primary of several endogenous members of the class of mineralocorticoids in humans. Deoxycorticosterone is another important member of this class. Aldosterone tends to promote Na+ and water retention, and lower plasma K+ concentration by the following mechanisms:

Aldosterone is responsible for the reabsorption of about 2% of filtered sodium in the kidneys, which is nearly equal to the entire sodium content in human blood under normal glomerular filtration rates.[13]

Steroid receptors are intracellular. The aldosterone mineralocorticoid receptor (MR) complex binds on the DNA to specific hormone response element, which leads to gene specific transcription. Some of the transcribed genes are crucial for transepithelial sodium transport, including the three subunits of the epithelial sodium channel (ENaC), the Na+/K+ pumps and their regulatory proteins serum and glucocorticoid-induced kinase, and channel-inducing factor, respectively.

The MR is stimulated by both aldosterone and cortisol, but a mechanism protects the body from excess aldosterone receptor stimulation by glucocorticoids (such as cortisol), which happen to be present at much higher concentrations than mineralocorticoids in the healthy individual. The mechanism consists of an enzyme called 11 β-hydroxysteroid dehydrogenase (11β-HSD). This enzyme co-localizes with intracellular adrenal steroid receptors and converts cortisol into cortisone, a relatively inactive metabolite with little affinity for the MR. Liquorice, which contains glycyrrhetinic acid, can inhibit 11β-HSD and lead to a mineralocorticoid excess syndrome.

Control of aldosterone release from the adrenal cortex 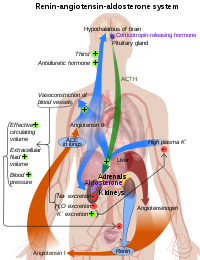 The renin–angiotensin system, showing role of aldosterone between the adrenal glands and the kidneys[15]

The role of the renin–angiotensin system

Angiotensin is involved in regulating aldosterone and is the core regulation.[16] Angiotensin II acts synergistically with potassium, and the potassium feedback is virtually inoperative when no angiotensin II is present.[17] A small portion of the regulation resulting from angiotensin II must take place indirectly from decreased blood flow through the liver due to constriction of capillaries.[18] When the blood flow decreases so does the destruction of aldosterone by liver enzymes.

The plasma concentration of potassium

The amount of plasma renin secreted is an indirect function of the serum potassium[21][22] as probably determined by sensors in the carotid artery.[23][24]

Adrenocorticotropic hormone (ACTH), a pituitary peptide, also has some stimulating effect on aldosterone, probably by stimulating the formation of deoxycorticosterone, a precursor of aldosterone.[25] Aldosterone is increased by blood loss,[26] pregnancy,[27] and possibly by further circumstances such as physical exertion, endotoxin shock, and burns.[28][29]

The role of sympathetic nerves

The aldosterone production is also affected to one extent or another by nervous control, which integrates the inverse of carotid artery pressure,[23] pain, posture,[27] and probably emotion (anxiety, fear, and hostility)[30] (including surgical stress).[31] Anxiety increases aldosterone,[30] which must have evolved because of the time delay involved in migration of aldosterone into the cell nucleus.[32] Thus, there is an advantage to an animal's anticipating a future need from interaction with a predator, since too high a serum content of potassium has very adverse effects on nervous transmission.

The role of baroreceptors

Pressure-sensitive baroreceptors are found in the vessel walls of nearly all large arteries in the thorax and neck, but are particularly plentiful in the sinuses of the carotid arteries and in the arch of the aorta. These specialized receptors are sensitive to changes in mean arterial pressure. An increase in sensed pressure results in an increased rate of firing by the baroreceptors and a negative feedback response, lowering systemic arterial pressure. Aldosterone release causes sodium and water retention, which causes increased blood volume, and a subsequent increase in blood pressure, which is sensed by the baroreceptors.[33] To maintain normal homeostasis these receptors also detect low blood pressure or low blood volume, causing aldosterone to be released. This results in sodium retention in the kidney, leading to water retention and increased blood volume.[34]

The plasma concentration of sodium

Feedback by aldosterone concentration itself is of a nonmorphological character (that is, other than changes in the cells' number or structure) and is poor, so the electrolyte feedbacks predominate, short term.[28]

A measurement of aldosterone in blood may be termed a plasma aldosterone concentration (PAC), which may be compared to plasma renin activity (PRA) as an aldosterone-to-renin ratio.

Primary aldosteronism, also known as primary hyperaldosteronism, is characterized by the overproduction of aldosterone by the adrenal glands,[37] when not a result of excessive renin secretion. It leads to arterial hypertension (high blood pressure) associated with hypokalemia, usually a diagnostic clue. Secondary hyperaldosteronism, on the other hand, is due to overactivity of the renin–angiotensin system.

Conn's syndrome is primary hyperaldosteronism caused by an aldosterone-producing adenoma.

Depending on cause and other factors, hyperaldosteronism can be treated by surgery and/or medically, such as by aldosterone antagonists.

The ratio of renin to aldosterone is an effective screening test to screen for primary hyperaldosteronism related to adrenal adenomas.[38][39] It is the most sensitive serum blood test to differentiate primary from secondary causes of hyperaldosteronism.[40] Blood obtained when the patient has been standing for more than 2 hours are more sensitive than those from when the patient is lying down. Before the test, individuals should not restrict salt and low potassium should be corrected before the test because it can suppress aldosterone secretion.[40]